Scherkondetalbrücke (Thuringia) and the Blaue Welle (Flöha, Saxony) are the prize winners

Award winners for the 2012 German Bridge Construction Prize are, in the category of “Road and Rail Bridges”, the Scherkondetalbrücke in the Weimarer Land and, in the category of “Foot and Bicycle Bridges”, the Blue Wave (Blaue Welle) in Flöha. The awards were presented on March 12 in Dresden. Honours were bestowed on Dipl.-Ing. Ludolf Krontal and Dipl.-Ing. Stephan Sonnabend, as well as Dipl.-Ing. Frank Ehrlicher, as the principal engineers.

In the 576.5 m long Scherkondetalbrücke, Ludolf Krontal and Stephan Sonnabend have set a milestone in modern railway bridge construction. The bridge sets new standards with regard to design and structural engineering. The almost seamless and bed-free design made possible an especially low-maintenance and sustainable architectural structure.

Frank Ehrlicher fluidly and dynamically adapted the S-shaped curvature of the 110.6 m long bridge, nicknamed the “Blue Wave”, to the local conditions. The elegance of this financially optimised solution and its blue colour scheme have a decisive effect on the appearance of the new railway station area.

Celebrating with the prize winners were some 1,300 guests at the 2012 German Bridge Construction Prize award ceremony held in the Audimax venue of the Technical University of Dresden. First awarded by the Federal Chamber of Engineers (BIngK) and the Association of Consulting Engineers (VBI) in 2006, honours are bestowed in the categories “Road and Rail Bridges” and “Foot and Bicycle Bridges”. As well as the architectural structure, the prize sculpture was awarded to each of the engineers involved whose creative work was key to conception of the bridge.

The German Federal Ministry for Transport, Construction and Urban Development (BMVBS) supports and promotes the German Bridge Construction Prize as patron within the framework of the Building Culture initiative. Deutsche Bahn AG is the main sponsor.

The German Bridge Construction Prize of the BIngK and VBI is awarded every two years to increase public awareness of the contribution of engineers to architectural heritage. The prize serves to honour creative engineering achievements in the supreme discipline of structural engineering.

A total of 37 applications were received for the 2012 German Bridge Construction Prize competition. Out of these, the jury chose to nominate three architectural structures per category and to select one victorious construction.

In addition to the winners, the Scherkondetalbrücke and “Blue Wave”, Flöha, the jury nominated the following architectural structures for the 2012 German Bridge Construction Prize: the Niederrheinbrücke Wesel (North Rhine-Westphalia; NRW) and the Sandauer bridge in Havelberg (Saxony-Anhalt) in the category of “Road and Rail Bridges”; in the “Foot and Bicycle Bridges” category, the bridge over the Rhine-Herne Canal near Gelsenkirchen (NRW) and the Victor Neels bridge over the Urftsee lake in the Eifel National Park (NRW).

Detailed information on the prize ceremony and the winning architectural structures, as well as photographs of them, is available on the web at: www.brueckenbaupreis.de 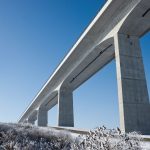 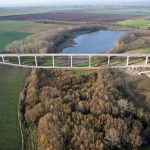 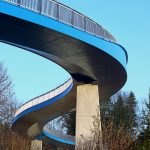 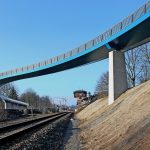